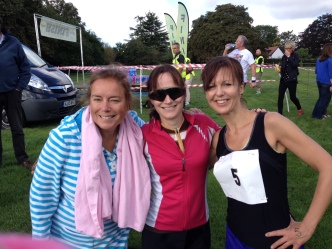 Back on a sunny day in June, my good friend Mel asked me if I would like to take part in a triathlon with her; her to swim, me to cycle and Petra to run.  It seemed like a good idea at the time – especially as it was two months away…but before I knew it, the day dawned.  And I mean dawned – we had to be there at 0730, which meant my poor babysitter had to get up with the Larks too!

The five relay teams were up first, which is how I found myself in a small pen, in a school tennis court, with four strapping men, in Lycra.  One-by-one they disappeared into the rising dawn until I was the sole occupier of the pen; then suddenly like a scene out of Baywatch – minus the coiffed hair and liberally-applied make-up – Mel was streaking across the tennis court in her red swimsuit.  A few moments of fumbling ensued, as we tried not to lose precious time transferring the soaking chip timer from her ankle to mine.   The next part seemed to go in slow motion – and probably was in slow motion – as I had to recall the correct sequence of when to put my helmet on my head, when to remove my bike from the stands and where I could mount the bike.  Anything out of sequence and we incurred a time penalty.  Given that I am renowned for forgetting just about everything: school parents’ evenings, school photos, school socials… this was no small feat!

I had previously practised this 12-mile route with my husband barking orders at me and achieved a respectable 17.4 mph, but was worried that without my pseudo-sergeant major shouting at me, my time might slip.  I needn’t have worried:  as I  set off on a couple of busy roads, before reaching the quiet country lanes, my competitivity kicked in.  I knew that the boys had a couple of minutes lead on me and there wasn’t much chance of spotting them, let alone catching up with them, but what surprised me was my determination to equally not let anyone catch up with me.  Part of this, I should admit, was due to the drafting rules, where if someone overtakes you, you have to slip back a certain distance.  Seriously, I would have to temporarily fall back…is that really fair?

Confession time: I had not told my team members that I can’t remember how to mend a puncture and so had to scan the roads and lanes ahead of me for broken glass and visible thorns.  As I approached the end, I was so relieved that I had managed the whole route without a puncture, as well as not tumbling off my bike, remembering to smile [grimace] at each Marshall managing junctions and succeed in no-one overtaking me.   For the final part of the route, some comedian had chosen a hill and so I found myself panting as I entered the school grounds and only-just noticed a guy yelling at me to dismount my bike before the finish line.  Practically falling off my bike, so as not to incur a time penalty for the team, I then saw Petra yelling encouragement [determination to get started] from the pen and had to run with wobbly legs – pushing my bike and putting it back on the stands first, with my helmet – so that we could do another fumbling transfer of the chip timer.

Watching Petra run off into the distance, I could finally relax!  And sitting on the grass banks afterwards with a bloke who had completed the whole thing, he told me how the previous year he had been just like me and cycled as part of a team and did I think I would be like him and do the whole thing next year? Um no, I did not!

The good news is that out of five teams we came fourth, which, as the only all-girl team, we are quite proud of!  Would I do it again?  Absolutely; as part of a team, as it was working with such an inspiring couple of girls that motivated me and made the triathlon fun!

Follow The Med, the mad and the MoD on WordPress.com

Lou @ the Med, the mad and the MoD

...stories & creative adventures of a family in business

The crazed ramblings of a wife of a Royal Naval Sailor

A sincere blog about a donkey

A blog about anything, as long as it fits in the pot.

Life at The Merry Nest

She is Lola
Tina Bessell