Once you have worked in the charity sector, you may never want to leave.  As clichéd as it may sound, it really is true that your work feels more worthwhile when you know that it is making a difference to someone, somewhere.  I spent several years working as the PR Manager of Kidney Research UK and remember being surprised in my early days as to how much of the funding for scientific advances comes from the charity sector.  And how invaluable therefore the public’s donations really are!  Being the PR manager of a UK charity was never going to work logistically from an Air Force base in Cyprus, but luckily I was able to continue using my PR expertise by working for a local events committee.  We also lucked out with our house as we had the nicest neighbours, who I had the utmost respect and admiration for.  Not because they threw lots of fun dinner parties -which they did! – but because they endured so much: Shaun, the husband and dad, had to go on frequent operations due to his role as a casualty nurse.  Shaun’s experiences led him to set up a most-inspiring charity: here’s his story:

As Officer Commanding the Medical Emergency Response Team (MERT), Shaun and his team brought emergency care over the skies of Afghanistan, via the Chinook helicopter, to retrieve the casualties on the battlefield. Clearly the nature of the job often meant that the MERT team would also have been under fire as they set out to save people’s lives.   What Shaun and his team must have seen and felt is unfathomable and this was surely compounded for all the families by being separated for long and frequent periods of time.

Shaun increasingly found the transition on returning home challenging but, after completing a Royal Yachting Association Yachtsmaster Offshore course during his resettlement, he realised that the effect of the sea was hugely beneficial: “I felt in a better place: it markedly improved my interaction with others; delivering a new sense of purpose, value and belonging.”  Shaun decided to turn his harrowing experiences into an opportunity for other Armed Forces personnel and their families, by setting up the Turn to Starboard charity, which uses RYA sailing courses to support Armed Forces personnel – serving and retired – that have been affected by military operations. 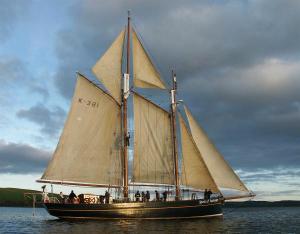 In sailing terms when two boats are heading towards each other, the action of both of them turning to starboard [turning to the right] avoids a potential collision.  And this is how Shaun came up with the charity’s name: “We use sailing to help Service Personnel and their families make the right turn.  Sailing is known to provide elements conducive to the ethos of the Armed Forces; including team cohesion, the challenge of adventurous training and leadership skills.  We are a group of Yachtmasters and volunteers; civilian, ex-service and serving and most of us have experienced  the challenge posed upon transitioning from hostile conditions during military operations, to returning to normal life.  It can be hard to share and discuss our experiences; even with loved ones. But by grouping these individuals together, we provide them with an opportunity to share their experiences and begin their journey of re-adjustment. Our focus is on re-integration and re-engagement whilst providing something tangible in the form of an internationally-recognisable qualification, in a supportive and unique environment.”

The sea, a soothing and powerful force of nature, has long been thought to provide a welcome relief from stress, anxiety and tension and these testimonials say it all:

Aaron, aged 10: “My daddy came back from Afghanistan, but when we went sailing he really came back.”

Ben: “I was injured in 2012… I have not had anybody to talk to properly and I have never been able to speak to anyone with post traumatic stress disorder, so it’s been a very lonely and extremely isolated journey for me.  Going on Turn to Starboard, without a doubt, turned my life around.  I have been able to talk openly for the first time…the week sailing was the first time since tour that I have been able to be me and feel like I belong somewhere and fit in as part of the team…I intend to continue sailing as much as possible and get my family involved.”

Paul: “The week on the yacht was amazing, for the first time since 2006 I haven’t had to apologise for not being able to keep up, or take part…I felt part of a team and that I had the ability to contribute..it was the first time in eight years that I have slept well..I felt safe in the presence of like-minded people..I felt excited, exhilaration, I felt like I used to feel…I could hear the noise of the sea and the sound of the water…I felt free, I felt alive.”

Follow The Med, the mad and the MoD on WordPress.com

Lou @ the Med, the mad and the MoD

...stories & creative adventures of a family in business

Ramblings of a wife of a Royal Naval Sailor

A sincere blog about a donkey

A blog about anything, as long as it fits in the pot.

Life at The Merry Nest

She is Lola
Tina Bessell